Tomorrow, the 2011 Practical Pre-School Award winners will be announced. We’ve got five books nominated across various categories. Louisa and I are going along to the ceremony in London to represent Priddy and report back. Let’s hope we can match the success of last year! We’ll let you know how it all goes… fingers crossed! In the meantime, why... Read more 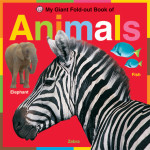 We’re delighted that our My Giant Fold-out Book of Animals has won the Sheffield Baby Book Award 2010. We’d like to thank all the children and parents in Sheffield who voted My Giant Fold-out Animals Sheffield’s number one baby book, and the organisers who gave Liz such a warm welcome at the ceremony yesterday. And... Read more

The Sheffield Baby Book Award is an annual award run by Sheffield Library Services. Priddy Books have always been popular with the children and parents of Sheffield who vote for their favourite baby book, and this year is no exception! Our My Giant Fold-out Book of Animals is one of just five titles on the... Read more