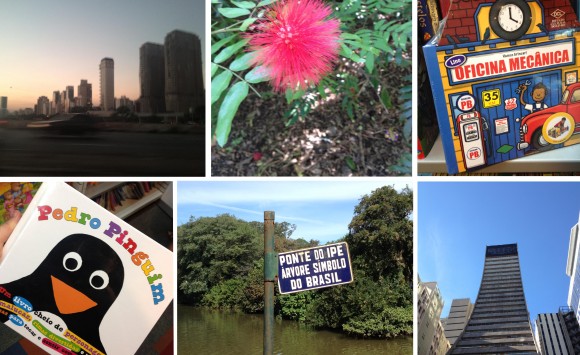 Travelling is a big part of my job, but until last week I’d never ventured out of Europe on business. So when I was asked to go to Brazil with Emma, I jumped at the chance.

The eleven-hour flight passed quickly once I’d decided which films to watch, and soon the plane was descending over São Paulo. It was still dark at the time, and so it was difficult to appreciate how big a city it is. Three days and twenty taxis later, we had a much better idea: São Paulo is HUGE, and not only does it stretch far and wide, but upwards too. I’ve never seen so many tall buildings in one place! São Paulo is also famous for its rain but the sun shone throughout our trip and, even though it’s the beginning of winter there, it was just as hot as the UK in summer.

We also flew to Curitiba, which is a colourful and much less hectic city. Here we had a chance to visit a few book shops, where it was really nice to see so many of our books on sale, including Rainbow Rob’s Brazilian cousin, Pedro Pinguim! Unfortunately they weren’t quite as popular as a book written by a famous priest, who was signing copies during our visit. There was a queue of hundreds of people which stretched out of the shop and around the corner!

The purpose of our trip was to catch up with some of the publishers who translate and publish our books in Brazil. They were keen to see our new titles and it was great to hear such good feedback on the titles our designers and editors have put such hard work into creating.

We both really enjoyed this trip; Brazil is a really exciting place. The people were friendly, the food delicious and we even saw parakeets in the park, which are much more colourful than the pigeons we’re used to in London.

Would you like to check out where else we’ve been this year? Read Tom’s Travel Diary.