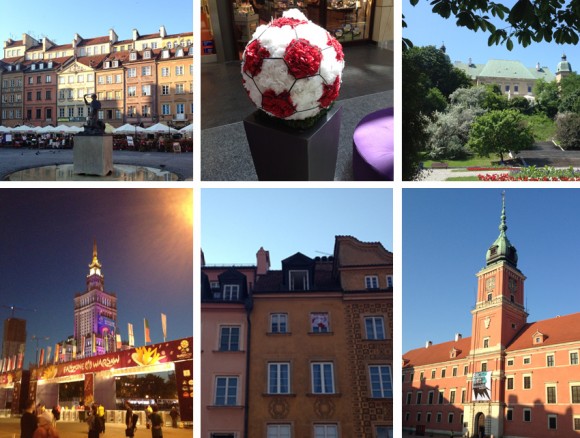 In case you’ve been living in a cave for the last month and haven’t seen the football on TV, the Euro 2012 Championship is currently being held in Poland and Ukraine. What better time, I thought to myself, to visit the Polish capital to meet with some of our customers there.

And it didn’t disappoint; the city was completely football crazy and even though Poland had been knocked out of the tournament a few days before my visit, the enthusiasm was a sight to behold. Being a Fulham fan I’m not used to such die-hard support. Everything was red and white, football-shaped lights stretched across Nowy Świat Street and there were even flower arrangements in the shape of red and white footballs in Złote Tarasy, a shopping centre where I spent a long time looking at books. My hotel was right next to the Warsaw Fanzone, where football fans gathered to watch Spain vs Croatia on a big screen. The celebrating Spaniards outside made it difficult to get to sleep, but I can’t complain; if England had won while I was there I think I would be the same!

Of course there’s much more to Warsaw than football and after a day full of meetings with publishers, I managed to find time to visit the Old Town which is completely different to the tall buildings and traffic of the city centre, and full of painstakingly restored townhouses, churches and squares full of restaurants. One of my favourite sights was the statue of the Warsaw Mermaid who protects the city. According to legend, the people that lived there freed her from the clutches of a rich merchant who captured her.

Next time I visit the football will have finished, but I’m still looking forward to it as it’s such an interesting place. Do zobaczenia wkrótce! Or as the Polish would say, see you soon!

Would you like to check out where else we’ve been this year? Read Tom’s Travel Diary.